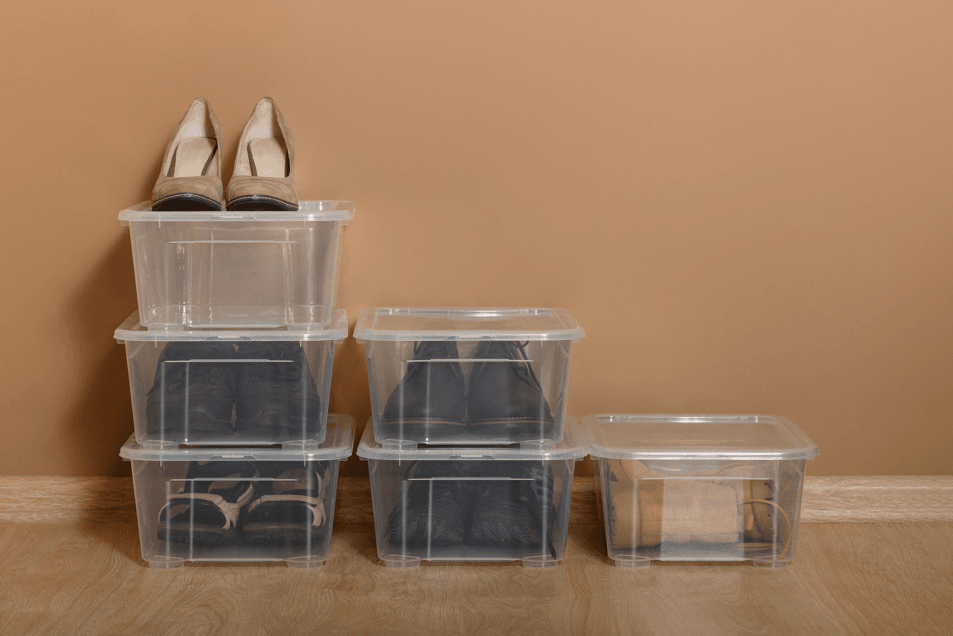 How to prevent mould in storage containers

Boxes and containers are the perfect solution for a whole host of storage needs. However, from bedding and clothing to books and crockery, it’s important to find a box that guarantees the preservation and security of the items you want to store away.

One of the main concerns when using storage boxes is the potential contamination of mould and mildew. Many people have found that when they come to retrieve their items, they are damp, soiled and in some cases, unsalvageable.

If moisture gets into a container before it’s sealed, there’s a good chance that mildew will grow and fester on your belongings and on the box itself. Mould and mildew removers are available in most supermarkets to combat the fungus directly, however, there are also a number of steps you can take to prevent mould and mildew before it can form.

How to keep moisture out of storage containers

Fungus thrives under humid conditions and condensation can occur inside containers if proper preservation methods aren’t implemented. If moisture begins to seep into your storage box, everything inside will become susceptible to mould. Silica pellets are one of the most effective drying methods. To prevent your container from touching the floor and absorbing water, place it on raised wooden pallets with a sheet of plastic separating the wood from the container or invest in some shelving panels for your garage.

There are several other preventional measures that can be implemented to tackle mould before it grows.

The container you choose will depend on what you want to store. For solid items, like books, it’s best to go for a breathable, acid-free box that will prevent the intrusion of moisture. For the likes of clothing, you should try and avoid using boxes alone. Instead, vacuum-sealed bags are the best air-tight solution, which can also be folded and stored in a box.

Make sure items are clean and dry before storing.

It’s essential that your items are thoroughly clean and dry before being stored. Dirt can leave a permanent coating on your items if they’re left in that condition for too long. Moisture can attract mould that will fester on clothing and upholstery if stored when damp, as well as causing metal and woodwork to rot or rust.

Place desiccators in your box.

Desiccants are substances used as drying agents, such as silica gel packs. As you’re packing, it’s worth placing a few into your boxes to absorb any moisture that could potentially get in. Note that some packets have expiry dates so will need replacing.

Ensure there is proper airflow.

Airflow is an important factor in the prevention of mould and mildew. Leave room between stacks of boxes and don’t push them directly against a wall. You should also avoid placing them on a concrete floor as moisture from porous materials can leak through.

How to make a storage container airtight

It’s important for containers to be airtight before being placed in storage. To achieve this, try and fill your items into the box as tightly as possible. Internal lids make all the difference. They can be purchased from craft shops and are designed to fit tightly around the edge of the container.

Alternatively, you can make your own using cling film and an elastic band. Simply stretch the film over your box so no creases form and attach it to the opening of the container using the elastic band. Once you’ve created an effective internal lid, fit the external lid over. Many containers feature strong airtight lids, such as depressor seals. For optimal protection, you can also wrap duct tape tightly around the outside of the lid.

How to insulate a storage container

You may be storing your items in a suitable climate that doesn’t require any additional cooling or heating. However, if you’re intending on placing your container in a cold environment, such as an outdoor garage, then it’s worth learning a few ways in which you can insulate your box.

The same techniques that are applied to insulate large storage rooms and lofts can be used. The most effective method for smaller containers is blanket insulation. Simply use tape or glue and stick down wool or cotton, such as old blankets, to the inside of your container. Not only will this decrease the chances of mould, but the padding will also provide an added layer of protection to your items.